Living a Making: Source in the Literary Work of M.C. Richards by Julia Connor

Living a Making:
Source in the Literary Work of M.C. Richards
by Julia Connor

Editor’s note:
From 1981 to 1987, Julia Connor studied with poets Robert Duncan, Diane di Prima, and David Meltzer. Since 1988, she has taught poetry in a wide variety of contexts, from MFA Programs to State Prisons. Since 1992, she has taught workshops and master classes in Sacramento and continues to give presentations. She was named Poet Laureate of Sacramento in April of 2005. In addition to poetry, Julia is also a painter and ceramicist who holds a certificate from Chouard, Los Angeles (1968), where she studied under master potter Ralph Baccera. A life-long protégée of renowned potter, poet, educator, and Black Mountain College Faculty member, M.C. Richards, author of Centering in Poetry, Pottery and Person, Julia now serves as literary executrix for the M.C. Richards Estate. In this authoritative introduction to Richards’ life and work, Connor borrows “living a making,” an expression used by Peter Stephen Berg, radical environmental thinker and advocate for “bioregionalism,” a term coined by Allen Van Newkirk, founder of the Institute for Bioregional Research. Peter Berg, Raymond Dasmann, and Kirkpatrick Sale underscore how a bioregion is also a cultural phenomenon, emphasizing local populations, knowledge, and solutions. As Connor indicates and M.C. Richards makes clear in this reading of “Deep Ecology,” the political and environmental meet at the local level, where sustainability can be considered and fostered.

Mary Caroline Richards said over and over again that life is the big art—everything else is apprenticeship.

Though she described herself as a “teacher, potter and poet,” she synthesized those roles, crossing boundaries and practices and pursuing deeper forms in art, forms central to a lived life. The following is intended as a brief survey of her life and the significance of her artistic explorations.

Richards was born in Weiser, Idaho, in 1916. She received her Ph.D. in English from UC Berkeley in 1942 and taught English at Berkeley as well as the University of Chicago before joining Black Mountain College in 1945, where she taught courses in what she named “Reading and Writing.” From 1949-1951, she served as chair of the faculty and participated actively during the ups and downs of those years.

Richards and her students started The Black Mountain Press. There, she handset, printed, and bound her first volume of poetry called Poems in 1947-48. For the summer session that year, she translated Erik Satie’s play, Le piège de Méduse, which was then produced by John Cage, directed by Arthur Penn, and performed by Buckminister Fuller and Merce Cunningham.

In 1951, Richards resigned her post at BMC, leaving for New York in the company of John Cage and pianist, David Tudor, but not before having secured poet Charles Olson for the BMC faculty. Olson was to serve as rector from 1953 until Black Mountain’s closing in 1956.

She returned for the subsequent summer and participated in the first “happening,” a performance art event that involved the audience as both observers and participants, organized by John Cage and involving, among others, Robert Rauschenberg, Charles Olson, David Tudor and Merce Cunningham.

In New York, at Tudor’s urging, Richards translated Antonin Artaud’s Le Théâtre et son double; Grove Press published The Theater and Its Double in 1958 to wide acclaim. It is still considered to be the definitive translation of Artaud’s text. The book introduced Artaud to the avant-garde scene in America. Among the New York theater groups that deeply imbibed the radical nature of Artaud’s theories were The Living Theatre and The Open Theatre. Both created work that was to change the face of American theatre, offering an explosive alternative to the narrative play that had dominated the stage for a generation.  Equally, Artaud in translation greatly determined the direction of performance art in America.

Richards was thirty-two when the BMC press, (later to become the home of Black Mountain Review), printed the first collection of her poems. Similar to the Artaud text, and her translations of Cocteau and Satie, the poems arose out of the milieu, context and interests surrounding her. It was during her years of teaching at BMC—1945 to 1951—that she sewed the seeds of her mature work. Having caught the pottery bug while teaching English, the pot shop became the incubator of her thought; the potter’s craft became her entry into the deep territory that would ground her later books.

Her practice of pottery and poetry would grow to maturity at Stony Point, a small community outside of New York City, which she joined with many other past Black Mountain faculty. At Stony Point, Richards shared a studio with master potter Karen Karnes and her husband David Weinrib, both former BMC faculty members. Here, the intertwining of threads of her varied life—discipline in the studio arts, community-building skills, gardening, and a deep appreciation for the seasonal festivals with personal inquiry and intellectual rigor—were woven together.

The year she left Stony Point, Richards gave her first pottery workshop at Haystack School of Crafts in 1961. Her book, Centering in Pottery, Poetry and the Person, was published by Wesleyan Press. It was one of those books that seemed to wend its way round and about, becoming something of an underground classic. In 1989, Wesleyan published its 25th anniversary edition. As one who receives royalties from its sales, I can testify that it is still working its way through the fabric of our times.

In 1965, returning again to Haystack, Richards taught a course called “Writing As A Handicraft;” in 1966, this time at Penland, Richards taught “Cross-over To A New View of Language: Verbal and Non-Verbal.” The inter-disciplinary work had begun.

In 1973, Wesleyan brought out MC’s The Crossing Point: Selected Talks and Writings. Its composition occupied the years 1964 to 1971. In its opening passages, Richards tells us the book “is made up of real talks for real occasions, with real people in them.” Later, she confides,

… you can find a kind of story line through the years from 1964-1971, which these talks span. The first one was given in 1964, just before my book Centering was published. Then and during the months to come, I went through a personal crisis which tested me and my book to its core. As a result of it, I left my home in Stony Point, New York, where I had lived for ten years, my community there, my pottery studio, my garden, all the patterns of my emotional dependency as well as the life I had helped to build. Previously it had not seemed imaginable that I should live without them, and survive as the person I was. (vii-viii)

Still later she asks questions that preoccupy her for the rest of her life:

Where is the new resource to come from which will help us to begin to alter our view of ourselves—to soften the edges—to allow a plasticity and openness and flow to transform our picture of ourselves and of human nature? (69)

Each of the Wesleyan books explore Richards’ determination to encounter wholeness an inclusive mixing of opposites—inner and outer, prose and poetry, spiritual and mundane, artistic and practical, visible and invisible. Her writing continually manages to avoid binaries by crossing boundaries.

By 1968, Richards had moved to a small farm in Pennsylvania. While composing The Crossing Point, she enjoyed a year’s joint appointment (Art and English) as Artist in Residence at the University of Lethbridge, Alberta, Canada, continued studio work, taught workshops, and in 1970, spent time in Japan.

Educational questions concerned Richards from the beginning. She was deeply influenced by Seonaid Robertson’s Rosegarden and Labyrinth: Study in Art Education (1963) and, from her time with David Tudor, with the work of Austrian seer and philosopher, Rudolf Steiner (1865-1925), founder of the Waldorf Schools. In 1980, Wesleyan published The Public School and the Education of the Whole Person and Toward Wholeness: Rudolf Steiner Education in America, the latter an in-depth structural examination of the process and principals behind Waldorf education. Furthering her connection to the work of Steiner, Richards moved to Camphill Village, Kimberton Hills, PA in 1984. The Camphill Village is an international movement that grew out of Steiner’s call for therapeutic work with the mentally disabled, or those, as Richards puts it, “in need of special soul care.” Each Camphill Village has a particular orientation, from crafts to agriculture. Kimberton Hills, for example, is a working biodynamic farm. Richards lived and worked there for the rest of her life, foraying into the larger world to teach workshops and give talks. Her most important teaching during these years came from her affiliation with Matthew Fox and his University of Creation Spirituality in Oakland, CA.

Of her time at Camphill, Richards has said,

Agriculture weaves through the fabric of my life as vividly as the threads of pottery, art, education, and inner development. Soil care and soul care are the heartbeat of the community in which I have chosen to live.

Until shortly before her death, Richards taught pottery at Camphill, designing classes for the resident farmers, and participating in all aspects of community life. Continuing to develop her defiance of the binary between abstract artistic ideals and real world applications, she developed a course called “The Renewal of Art through Agriculture.”

She also continued to publish books towards the end of her life. In 1991, Station Hill Press published Imagine Inventing Yellow: New and Selected Poems. The book earned the praise of John Cage, who wrote, “this book needs no blurb.” It is dedicated to Richards’ mother, Lily Kate, who pinned her poems to the kitchen curtains. 1995 saw a beautiful little letterpress chapbook, Before the Beginning, containing poems written after 1991 printed by the masterful Jerry Reddan of Tangram Press, Berkeley. Lindisfarne Press published Opening Our Moral Eye: Essays, Talks and Poems Embracing Creativity & Community, which was edited by her friend and long-time student, Deborah Haynes. The volume contains four full color reproductions of paintings done by Richards as well as the poems from Before the Beginning.

It is perhaps the essays in this book that most clearly establish the taproot of deep ecology that runs through all of Richards’ writing. In the essay “Imagination and Authenticity as Doorways to Creation,” she writes, 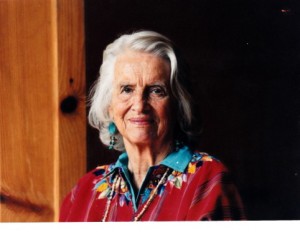 M.C. Richards around the age of 80. Photo courtesy of Julia Connor

Richards died on September 10, 1999 still very much a student of the process to which she committed her life. Her last poem, included in the chapbook just published by Black Mountain College Museum, is called “I Am Dying” (Backpacking in the Hereafter: Poetry Chapbook by M.C. Richards. Ed. Julia Connor, 2014).

In the film M.C. Richards: The Fire Within, MC asks, holding a fresh lettuce leaf up to the light, “Look at that, will you! Where does it all come from?”

Yesterday I was shucking corn
for supper–pulling off the green sheathes
and brushing away the silks–
and suddenly in my hand I feel the naked cob
so cool, sweat, intimate smooth, like skin I’m holding.
And I am deeply touched by surprise and rapture.

And I think how it is to feel life in the skin,
in the touch of plant flesh (sweet milk filling the seeds–
and how mostly people go for days
without touching anything from the earth
that lives in its skin, but mostly they are touching
metal, glass, plastic, formica, concrete, newspaper,
not a moment of rapture
as in the everyday glisten of sweet corn.

That it should be an EAR I’m holding!
How to fathom the image, how to fill the resonant spaces,
the cantata of its inwardness. Like ivory keys
I play the kernels with my tongue:

*Many magazine articles by Richards and  about M.C. Richards have appeared in Craft Horizons, which can be accessed through The American Craft Council Library Digital Collections, and The Studio Potter.