Editor’s note: While conducting research in the Black Mountain College Collections of the Western Regional Archives of the State Archives of North Carolina now held in Asheville , David Silver tracked down BMC Alum, Trueman MacHenry, and corresponded through email. After extensive electronic conversations that began on 21 January 2013 and continued until the publication of this journal volume, Professor Silver fashioned a history that incorporates key insights into the life of a living BMC legacy. MacHenry’s recollection, “Black Mountain College,” follows Silver’s article.

In the fall of 1946, Trueman MacHenry enrolled at the University of Wyoming (Laramie, WY). Two years later, the University deemed him an unsatisfactory ROTC student and asked him to leave. MacHenry then joined the US Coast and Geodetic Survey as a member of a mountain crew stationed in Arizona, in California, and finally in Alaska—on the side of the Aniakchak volcano.

The setting in Alaska was spectacular. As MacHenry recalls, “I spent a few weeks in a tent by myself on the side of this beautiful mountain with the sound of waterfalls from the melting glaciers in my ears night and day” (1 May 2013). Inside the tent, he read letters from John Andrew “Andy” Fisher, MacHenry’s friend from the University of Wyoming. Fisher had befriended Ilya Bolotovsky, Wyoming’s new professor of painting who had recently just arrived from Black Mountain College. Fisher learned about the radical arts college from Bolotovsky and shared the stories in letters to MacHenry, along with news clippings, faculty articles, and Norbert Wiener’s Cybernetics: Or Control and Communication in the Animal and the Machine (1948), a current favorite among a few BMC faculty members. Trueman MacHenry was sold. When volcanic activity made a rescue necessary, MacHenry was airlifted from the side of Aniakchak and landed, in fall 1949, at Black Mountain College. 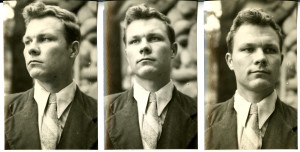 At BMC, MacHenry studied mathematics with Max Dehn, regarded during his lifetime as one of the world’s greatest mathematicians (see Peifer, Sher, and Dawson, Jr). Dehn, who taught mathematics, philosophy, Greek, and Italian at the college until his death in 1952, was a respected and revered member of the BMC community. Among the cantankerous, often-warring faculty, Dehn was universally admired—a gentle genius amidst rough visionaries. Among the students, he was known as the leader of epic nature walks up and down the college’s surrounding mountains (Sher 54).

Because the college was essentially a radical arts school with a scattering of liberal arts classes, Dehn had few math students. In 1951, he had only one: Trueman MacHenry, whose studies consisted of “reading and working on my own and reporting to him twice a week (or thereabouts) for tutorial sessions” (“Black Mountain College”). The sessions “might start in [Dehn’s] study, last an hour or so, continue with a cup of tea and conversation with him and Toni [Dehn’s wife and beloved member of the BMC community], and end with a two hour walk in the woods looking for some special orchid in bloom, spotting useful supplies of edible mushrooms, discussing mathematics, and, perhaps, history or philosophy or college doings.” MacHenry later said he never had another teacher who was “as sensitive, deep, or vastly philosophic” as Dehn (Yandell 133).

Mildred Harding, a “faculty wife” (married to John Adams, professor of anthropology) during the 1951-52 year and the downstairs housemate of Max and Toni, witnessed these tutorials first-hand. Throughout the year, Harding watched Dehn and MacHenry (“a bright-eyed, blond, clean, and courteous young man”) walk up and down the campus mountain paths, walking and talking. One day, Harding asked Dehn whether it was frustrating to give all his time to just one student. “Not at all,” Dehn replied, “he’s a real student, a real mathematician” (Harding 86).

But MacHenry studied more than math at Black Mountain College. He took modern dance classes with Merce Cunningham and Katherine Litz; he discussed music with Lou Harrison. Machenry took physical sciences with Natasha Goldowski and shared ideas about anthropology with Paul Leser. He studied French and Russian with Natasha’s mother, Madame Anna Goldowski (says MacHenry, “Madame regarded English as a kind of barbarian language, so our classes were conducted in French”), and linguistics and French with Flola Shepard (18 June 2013 email). 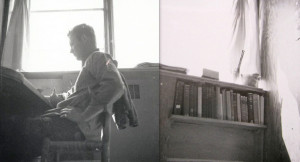 MC Richards was another important MacHenry influence. As he recalls, Richards and her then-husband Bill Levi “used to have wonderful ‘at homes’ [informal, semi-private gatherings in the apartments or cottages of Black Mountain faculty] where there would be poetry readings. And sometimes I was invited to an evening meal at their apartment, and the conversation would turn to literature and philosophy.” MacHenry also worked with Richards on plays, including Jean Cocteau’s The Wedding on the Eiffel Tower, translated into English (for the first time) by MC and staged in English (another first) at the college in 1949. Richards cast MacHenry and fellow student Mary Fitton as the two phonographs, the only speaking parts; the rest was mime. MacHenry also built “a number of props, suitably surrealistic” (1 May 2013 email).

In addition to more traditional academic and extracurricular activities, MacHenry was quite involved in the campus farm. When MacHenry arrived to the college in fall 1949, Ray Trayer ran the farm. Three years earlier, Trayer and his wife Dorothy (“Dottie”) joined a second farming family, Clifford “Cliff” Moles and wife Shirley, to run the college farm. Working with students and a few faculty members, Trayer and Moles worked hard to improve the soil, set up regular farm routines and crop rotations, and supplied the kitchen with dairy (milk, cream, butter, and cheese), eggs, and an occasional pig. Although Moles left in summer 1948, Trayer stayed on and even assumed, briefly, the role of interim college rector. In 1949, however, during a particularly tense faculty meeting, Trayer slugged Bill Levi in the face. Shortly thereafter, Trayer left the college. With Dottie running the college farm, Trayer spent over a year travelling to find another farm. When Dottie left, in 1951, the college hired two students to run the farm while they searched for a proper farmer. Student Stan Vanderbeek took over with help from his assistant, Trueman MacHenry.

In the summer of 1951, MacHenry explains, Doyle Jones, a local farmer from the town of Black Mountain, and his wife Clara took over the farm at Black Mountain College. Soon after Doyle’s arrival, a pig got loose. As MacHenry tells it, “There was the time when, in front of a lot of students who had come to the farm— it was unusual for many students to be around the farm, except when the call for extra help went out —a pig had gotten loose from the pen. Pigs, unlike cows and sheep, don’t drive easily. This one didn’t drive at all. So I got a lariat, coiled, did the usual twirl around my head, threw the loop and caught the pig by the hind legs. A great cheer went up, and I was a hero from the cowboy movies from then on. Doyle was watching” (17 June 2013 email).

Faithful to his name, Trueman divulged the truth: “The thing that is wrong with that picture is that, even though I learned to rope as a boy, I was never really any good at it. I did know that when roping horses, you aimed for the back legs, or the back feet, and that that is all that would work for a pig. The rest was a colossal, but timely, piece of luck. I smiled, and nonchalantly walked away. Fortunately, I didn’t have to repeat the trick.”

Shortly after the pig roping, on August 31, 1951, the BMC Board, on Doyle’s suggestion, approved MacHenry to be farm assistant for the 1951-52 year (Minutes from the Corporation Meeting, 31 August 1951, BMC Collections, Western Regional Archives). 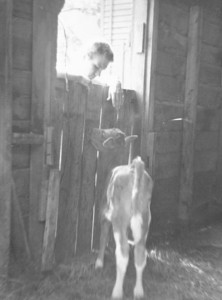 Unlike most BMC students, MacHenry had experience with livestock. On the farm at Black Mountain College, he could handle a horse, milk the cows, build fences, and work in the hay fields. In fact, MacHenry proved so able that Doyle had him oversee all new farm projects, which, in 1951-52, were steadily increasing.

Throughout its twenty-three year existence, Black Mountain College was broke. By 1950, conditions at the college were especially harsh and hungry. GI Bill Benefits were drying up and when Theodore “Ted” Dreier, Sr., and the Albers (Josef and Anni) left, in 1949, the college lost its only fundraiser and its most known faculty member. A sharp drop in student enrollment and thus tuition followed. As such, the college was desperate and entertained any and all ideas for extra revenue. Most of the ideas involved the farm.

One new idea— to start a large vegetable garden to feed the campus—was actually an old idea. A few months after the launch of BMC, in 1933, a handful of students, led by Norman “Norm” Weston, Anne “Nan” Howard Chapin, and David Bailey, proposed in a General Meeting to start a large vegetable garden on the Blue Ridge campus. The goal, they said, was to help feed the college and help build community. The garden was approved, planned, and planted, sprouting the college’s famous Work Program (Silver).

In summer 1951, Phyllis Iris Franklin, a new BMC student from Atwood, Kansas, proposed to add a large vegetable garden to the farm’s by-now regular production of dairy, eggs, and pork. Phyllis, together with MacHenry and Bea Huss (faculty wife of Wes Huss, professor of theater), rallied BMC students and faculty. “The resurgence movement,” recalls MacHenry, “with the marvelous organizing abilities and farming knowledge of Phyllis, was responsible for utilizing the pasture that you pass through when walking from the dining hall path, through the woods, across the pasture to the barn. Here we plowed, planted, and harvested probably an acre or two of vegetables with the help of most of the college during that summer and fall.” And then, like so many elements of BMC during the 1950s, “the efforts dwindled after that,” notes MacHenry (16 July 2013 email).

Another new idea came from students Fielding “Fee” Dawson and Dan Rice: the college would grow tobacco, “a money crop to save the college!” After a field of tobacco was planted, Fee and Dan, with help from MacHenry, built a tobacco drying barn. (For a literary version of the building of the Tobacco Barn, see “Fire and Love,” a chapter from the 1970 edition of Fielding Dawson’s The Black Mountain Book, 205-243.) Alas, the tobacco was cut either too early or too late, was cured poorly, and sold horribly.

In April, 1952, Max Dehn thought MacHenry was ready to graduate. Dehn petitioned the college to grant MacHenry leave from the farm to concentrate on his thesis. The petition was granted. Fittingly, not one but three students replaced MacHenry on the farm: Joel Oppenheimer, Rena Furlong, and Victor “Vic” Kalos (17 June 2013). 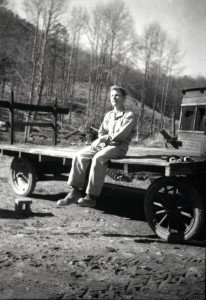 In mid-July, 1952, Trueman MacHenry took his graduation examination. His outside reviewer, a BMC tradition from the start, was Alfred Brauer, a professor at the University of North Carolina, Chapel Hill, and well-known German mathematician. MacHenry’s defense took place in the classroom in the Studies Building in front of the assembled faculty. Trueman MacHenry passed, thereby becoming something only a few dozen others have become: A Black Mountain College graduate.

Acknowledgement: I wish to thank Trueman MacHenry for the time and thoughtfulness he took to share his experiences at Black Mountain College and for replying, with grace and humor, to all of my emails. I also want to thank  Heather South, BMC archivist extraordinaire, for her tireless help and Mary Emma Harris for excellent feedback on an earlier version of this essay